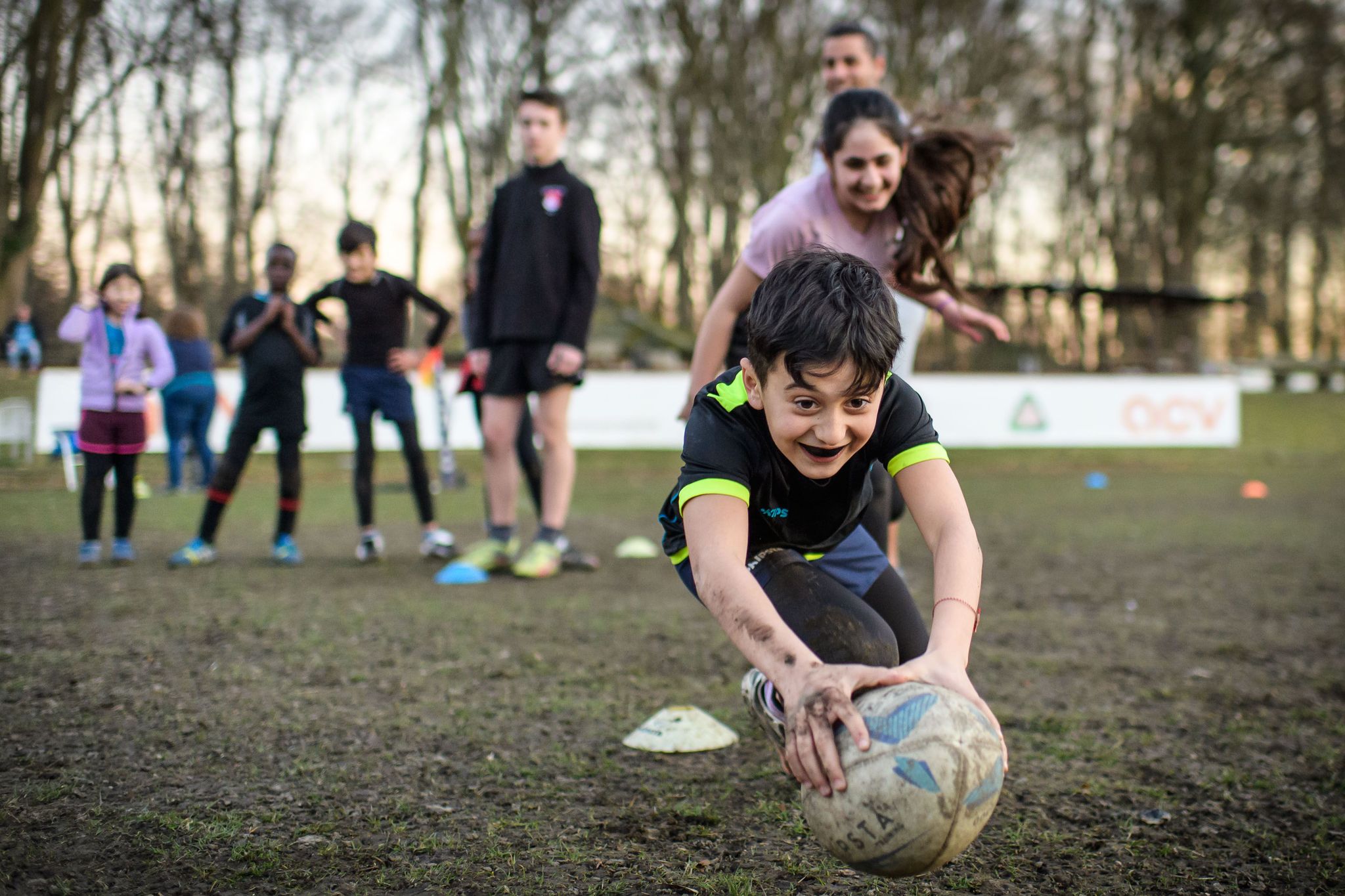 Seeing the smiles on the faces of the refugee children running around with an oval ball in hand is a weekly reminder to Lisa Naumann of the power of rugby in improving people’s lives.
German sevens international Naumann set up the Rugby United initiative four years ago, along with three of her Cologne team-mates – Johanna Metternich, Lynn Schüller and Vivian Salim – and the benefits are clear for all to see.
Every Tuesday at Rugby Park in Cologne around 30-50 children turn up for a 90-minute training session and then sit down to eat and socialise together irrespective of their background or whichever war-torn part of the world they may have fled from.
The children have found a second family in the rugby club and some much-needed stability in their troubled young lives and Naumann is just pleased that her love of the sport is being shared.
“After the refugees started to come to Germany, we thought what can we do to help them integrate and we thought of rugby because it is such a great sport and the club is like a family for us,” she explained. “They have so much fun releasing their energy because there is not much space for them within the week to do that, at school or wherever. “After training, we all sit down and have a meal cooked by someone at the club. Other than training we have a lot of other activities going on.”

LEVEL PLAYING FIELD. Most of the children, boys and girls aged six to 16, have never previously set eyes on a rugby ball let alone held one, but Naumann says that helps keep participation levels high. “I think they enjoy it because it is a new sport, something they can learn together all on the same level,” she said. “If it was football, for example, some kids might have played before and been a lot better than the others. “Discovering the body contact aspect within the game is something new for a lot of them, too, and they enjoy that.” Rugby United also gives the children a safe, disciplined environment that helps them to move on from their past. “Some of the kids that I’ve got to know, you could tell that there was something really bothering them, they were maybe traumatised or had some troubles in their mind, and they found it hard to listen to rules. “That became a lot better when we started to establish how they should behave on and off the pitch. “The more they get involved with activities at the club, the more they feel involved and a part of it.

WORLD CUP VISIT. Indeed a highlight for many participants (including Naumann and her fellow coaches) was the chance to get up close to see the iconic Webb Ellis Cup when it visited Cologne as part of the Rugby World Cup 2019 Trophy Tour and Rugby United were invited to join the celebrations. Rugby United has also given its participants a sense of belonging in an otherwise foreign land. “That’s noticeable when they play games involving regular youth teams, there’s a real sense of curiosity from both sides where they want to get to know each other better. “I think for the refugee kids they feel like this is something that I’ve learnt and if I practice, I can be as good as the other kids.” Naumann, 30, says the feel-good factor deriving from Rugby United extends beyond the children involved. “I wouldn’t have done it for four years if I hadn’t felt like we’d made positive changes, it is great to see the kids develop and grow and also how the team of supporters and coaches continues to grow in number and how the club is willing to help and engage.

“The project has made everyone at the club more open-minded.”